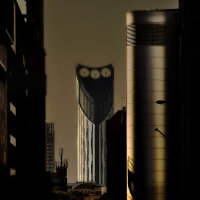 For the bulk of 2015, I have been working on several different photographic series, some of which are still in long-term production. Some of those series are presented on this website under the 'E-PORTFOLIOS' tab.

2016 is going to be the year of many series containing fewer images. I have a lot of ideas and it is time to make them real. So to begin with this website has been recently revamped, with new work and new galleries. These will be regularly updated, particularly the 'RECENT WORK' gallery and the 'E-PORTFOLIOS' galleries, as new work becomes available.

Recently added series are: TUVE MÖRK, MAY 2016, A DARKER VIEW, and HIGHGATE

In a way, TUVE MÖRK follows on directly from THE GOTHENBURG AFFAIR, in that it was shot in the same area, albeit this time in a rural forested area of Gothenburg, a little suburb called Tuve, and in the winter, over Christmas and New Year 2015/16. It was very peaceful and had a hard beauty. Hours of daylight were short. This area of Sweden is remarkable for the fact that their suburbs of what used to be a city of heavy industry have been built - planted - in forested areas. Flats and houses, robustly constructed, spacious and pleasant, are never more than a few minutes walk away from beautifully managed forest. The rooflines never get higher than the trees so you have the impression of living in a very rural area, even when you really are not. It was a lovely three weeks or so that I spent wandering the forests, investigating the lakes, and generally chilling out with nature.

Although there is generally an absence of litter of any kind which puts the UK to shame, of course I managed to find a burnt-out car in the middle of the woods. I have included this uninspiring sight in this series as a protest against our despoliation of the natural world. I took a great many images, which is reflected in the size of this series, although I am now thinking of restricting the editions of my series/portfolios to only 20 or so images, so as to avoid viewer exhaustion.

Later, in May of this year, I produced, over a very few days, a small series of images entitled 'MAY 2016'. Prosaic, but it was produced when the Spring bloom was at its height in a small area close to where I live. Now a managed public access area, it was originally part of a farm that still exists, and was a mixture of pasture and watermeadow. At some time in the past, there must have been habitation there as well, as there are a few areas containing now-feral orchard species. A place I regularly walk on my way to elsewhere, I have not really devoted a lot of time to investigating it in detail, but my attention was caught this year. At the time, I treated it as a meditation on the time of year, and found it immensely satisfying. Even here though the less attractive aspects of our modern life intrude; the blur of a supermarket sign through the dapple of the leaves in the Spring sunlight; the wisteria trying to consume a tatty old outbuilding. We should protest against these insults.

'A DARKER VIEW' strives for something more meaningful, deeper, and, well, darker, I suppose. It is about boundaries, between life and death, light and dark, soft and hard. In its inception, it was to be uplifting, and I believe that I have succeeded, even if a little sombrely. It was only while assembling the images for this that I realized how 'Blade Runner'-esque some parts of London are becoming.

'HIGHGATE' was a lot of fun. It came about from a visit to the cemetery with my old friend and ferreting partner, Rufus. I suppose you could get deep, you could take thousands of images, make it gothic, add vampires, whatever. I chose to give it a slightly filmic, mixed monochrome and colour treatment, and delivered - there are only 20 images, as I promised myself - a sort of casual wander through the space, concentrating on only some of the many interesting memorials. I particularly like the rather Father Christmas-like rendering of Karl Marx.

All the photographic series presented here are available free of charge on application through the 'LINKS' page. Just drop me your email and which portfolios you are requesting, and I will email you a pdf of the work you would like. If you don't know me yet, or understand what I do, it will cost you nothing, as I offer my pdf portfolios here free of charge.