I have mentioned doors and windows before. Less an obsession than an interest. Isolated, they are often beautiful, evocative and mysterious...

So from time to time I collect these little gems and occasionally ponder on the hidden or half-hidden secrets and delights that may just lie behind them.

While I enjoy the organic forms of plants, the regular symmetrical and organized architecture of a window or door can be very satisfying. Even in its starkest form, the barren, desolate but reflectively beautiful glass of the corporate world can evoke quite strong feelings, particularly when it mirrors a distant vista, or the sky. The very reflectivity often found on the glass prairies of these buildings which is meant to convey privacy, power and strength can contribute a facet of the natural world to its beauty. I like to think of it as an unintentional slap in the face to the Corporation. I know, I know, it is an architectural feature that also has function so that a building may be light and airy, and not overheat. But then, I also have a habit of transferring Bladerunner scenes into everyday life...hey, I like stained glass too. 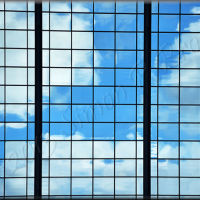 Turning to the organic, I found this in a half-derelict building. Nature reclaiming its own, by placing wild flowers (a species of Hypericum, I think, but I may be wrong) in a convenient space, mimicking a window box. I found this to be quite delightful. It satisfies a slightly suppressed interest in Urbex, with the broken glass, cracked wall, brown paper keeping the weather out,and the precariously balanced but tenacious and healthy-looking bright yellow flowers - (rooted in what?) - not only standing up to be counted, but also making my day. The fact that when making this image I had a freak accident with the end of my camera strap that left me with a scratched cornea and a lot of pain will not stop me pursuing this dangerous, ground-breaking and important form of art. 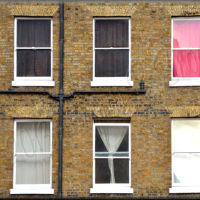 ...and contrast this rather bleak although pleasing image of our little hutch windows (what's the betting it is student accommodation?) with a little ivy peeking out of a broken fence... opportunistic vegetation, voyeuristic photographer...


All the thumbnails here can be viewed as I intended in the main Galleries section. Have a look around while you are here. Or go to the links view, and click my Flickr link where the same pictures, and more, are presented at a higher resolution.

Had nothing to moan about last time. My trawl through the architecture and haunts of Soho showed that there can be great beauty even in the middle of one of the greatest cities on Earth. So, then, HOW, WHY, has one of my favourite pubs recently been refurbished? That is, in itself, no problem, but it is a Tudor building, grew organically, and was delightfully - well - comfortable. Now, redecorated inside in company colours (dull beige and grey-greens), and generic decoration, totally out of keeping with its character they have managed, by some sort of black magic, to suck all the atmosphere out of it altogether.