A busy Summer and Autumn, with many expeditions that will appear in the Galleries once the processing is done. I am trying to work up an outraged photographic protest piece on civic freedom, freedom of speech, political protest and defending the 'little man' from the voraciously information-hungry and controlling State, but quite frankly, I really can't be arsed. (Or do I just say that to lull the implacable behemoth of Security into a false sense of...of... security?) Anyway, back to pretty pictures then.

For now a small – well - taster. Found a Griffon (Griffin, Gryphon) in The Parish Church of St Michael Cornhill with St Peter le Poer & St Benet Fink in the City of London, Ward of Cornhill. Wonderful name, and anything that I add to that will only detract from it. It was a most imposing creature; but that was just to catch your attention.


The real beauties are from the woods: 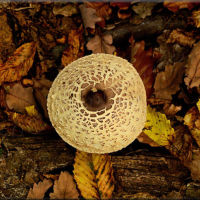 I do enjoy Autumn, and this year – still – promises fungal glory. In the meantime, I have found some rather nice and photogenic specimens to share here. Breaking several photographic and compositional rules, I caught a very pleasing Parasol Mushroom from above, creating an effective almost-abstract view. Slightly toxic raw, it is popular soaked in butter. I have actually been slightly poisoned by one of these, but it was cooked, so it could have been a pesticide residue that caused my symptoms. Most unpleasant, and I need not go into any more detail, but I survived to eat many more. 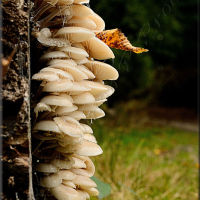 Less artistic but worth it for the slime, were a lovely bunch of Porcelain Fungus, glistening and festooned with spider silk. Probably how I will eventually be found, but hey, we all have to have a hobby.

But back to the fungi; Oudemansiella mucida. I love saying that. We found these beautiful specimens in Bayhurst Wood in Middlesex. Redolent of Autumn, the whole wood was suffused with the gentle perfume of mushrooms. Marvellous.

This fungus has some interesting properties (no, not those). The Porcelain Fungus competes with it fungal brethren (or is it a sisterhood? In fact, thinking about it, I have always regarded fungi as female, although really the distinction into genders doesn't generally work in this Kingdom) by producing a powerful fungicide itself. And this is used commercially as a group of agricultural fungicides, the strobilurins. So now you know.

But aesthetically, how deliciously slimy can you get? Absolute mucus-fest. With the strands of spider web attached, quite a gothic effect. Slime, mucus, spiders – it's got the lot. Quite beautiful. Edible, too, once you have washed off the mucus. True of a few things, but it is still not often that you get to write that last sentence. 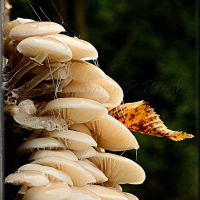 These delicate, slimy, deliciously mucus-y Porcelain beauties are not actually dripping their slime. The strands are spider web silk, laced with an angel's dusting of dew. But I understand your confusion.

Gooey doesn't even begin to describe it. These must be among the most beautiful fungi in the world. Delicate-looking, pale, almost shy the way they nestle up together. And covered with a perfect coat of shiny viscous muculent slime. Which is passively collecting... tiny insect corpses and things...maybe it's just me.


For the squeamish, here are two lovely views, within phlegm-hawking distance of the M25. 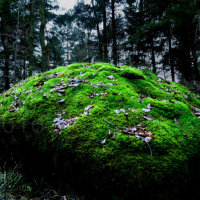